The Athabaskan language family is also often referred to as Na-Dené. Linguists estimate that Tlingít split off from common Athabaskan (Na-Dené) about 5,000 years ago 2). Some, however, consider Tlingít an isolate language (Campbell 1997) 3). 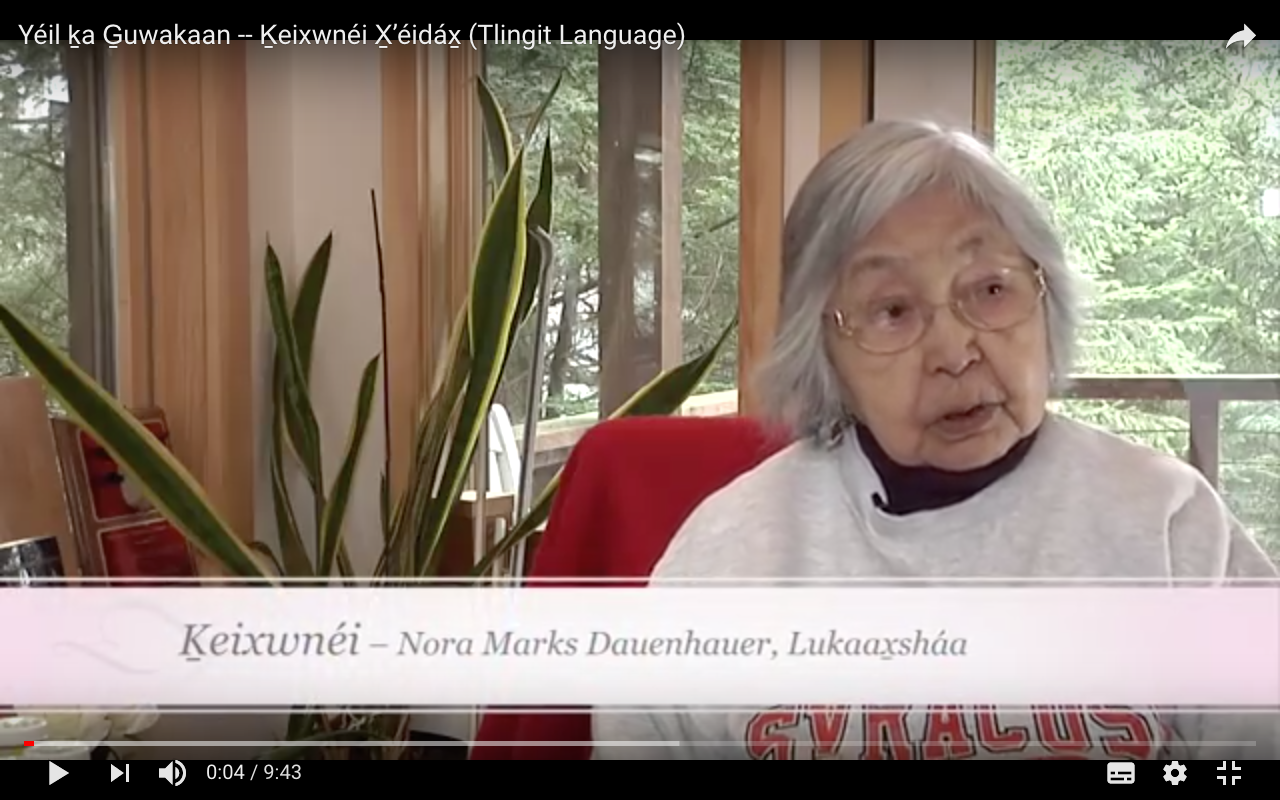 There are currently three orthographies, two of which are commonly used in Alaska 4).

The Canadian orthography was developed in the 1980s by the Yukon Native Language Center, and it is intentionally similar to orthographies used by other Athabaskan languages in Canada.

The so-called American orthography was developed in the 1960s by Constance Naish and Gillian Story to represent all the Tlingít phonemes. It later underwent some modifications in native hands, and in the 1970s Nora and Richard Dauenhauer published a Tlingít spelling book 5). It is the most commonly used system nowadays in Alaska.

Tlingít can also be spelt using the so-called e-mail orthography, which is a simplification of the American orthography. The system replaces the underscore diacritic (e.g., ták̲l), used to represent uvular consonants, with a digraph of the velar consonant plus h (e.g., tákhl). Its use has become more common with new technologies, since it can be easily input on a computer using an extended US keyboard.

Tlingít is the language of the Tlingít people, native to Southeast Alaska and Western Canada, from Yakutat to Ketchikan. It is spoken in an area that extends from the mouth of the Copper River down to the Gulf of Alaska and most of the islands of the Alexander Archipelago 6).

Almost all the Tlingít territory is currently within the borders of Alaska, with the exception of Inland Tlingít. This covers an area of northern British Columbia and southern Yukon (Canada) up to the Taku River and around the Atlin and the Teslin Lake, as well as a small concentration around Bennett Lake 7).

However, most speakers are nowadays found in and around Juneau, Alaska 8).

Tlingít is divided in five major dialects, which are mostly mutually intelligible 9).These can also be classified as two-tone dialects, three-tone dialects and non-tonal dialects. 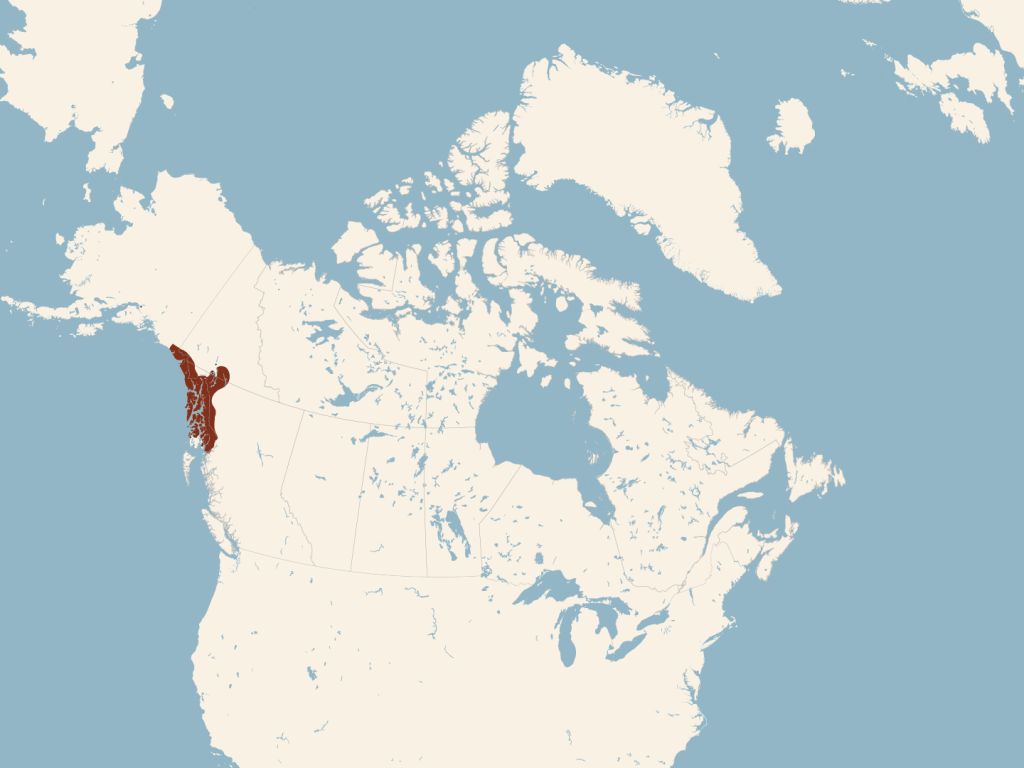 Map showing the areas where Tlingít was traditionally spoken 10).

Other organizations, however, give much lower figures: 300 (UNESCO), 500 (Linguamón) 14), which seems to be more in tune with the figures given by community surveys, which estimate between 200 and 400 fluent speakers in the US and around 100 in Canada 15).

Alaska was first settled by Europeans (Russians) in the late 18th century, who introduced bilingual programs in the native languages and Russian and even forced the displacement of large numbers of Aleuts, who were sent to Moscow. Alaska was later sold to the US in 1867 (Alaska purchase), and a policy of English only was established in schools. From the late 1800s to the mid-1900s the federal government separated families and forced native children into boarding schools in a large-scale assimilation campaign 18). Tlingít was strictly forbidden, and kids were punished if they were heard using the language.

However, some could escape this fate and some cities (e.g., Kake) started having their own school system in 1951, where the native language could be spoken 19).

When Alaska became the 49th state of the US, in 1959, this system had already finished, but the English only policy was still very strong. With the Civil Right Movement, however, the natives started demanding more self-determination (Alaska is, along with Hawai'i, one of the only two territories in the US where the natives do not have sovereignty treaties with the federal government) and some bilingual education was started in 1965 20).

Moreover, in 1971 the Alaska Native Claims Settlement Act was passed and Alaska Natives received title to 40 million acres of land and 962.5 million dollars in compensation, and new schools were built after that in areas inhabited predominantly by native population 21).

This bill made 20 native languages official languages of the state of Alaska alongside English (which had been made official in 1998) 23).

Among other things, the act establishes that 24):

The act also advocates for a policy to, among others 25):

In 2015 legislation was introduced to support the creation of immersion charter schools in Alaska. Even though there are plans to create an immersion Tlingit school 26), some studies have found that Tlingit efforts to establish immersion schools are hindered by a culture of teacher certification and required monolingual standardized testing (in English) 27).

As far as education in a Native Language is concerned ('native' is defined as a person of one-fourth degree or more Alaskan Indian, Eskimo or Aleut blood), AK Stat§ 14.30.420 (2016) establishes:

Most learning materials are developed by the teachers themselves, and often shared online (e.g., Lingít yoo x̲'atángi).

The creation of these materials may be funded by the different school districts (for Tlingit, especially the Juneau School District), the different Native Villages, the State of Alaska, the Federal Government of the United States, the Central Council of the Tlingit and the Haida Indian Tribes of Alaska (or CCTHITA) or private funding of different sorts.

It is possible to get a Tlingit certificate at the different branches of the University of Alaska, but it is quite common for the elders to be the Tlingit teachers. This often encounters opposition by legislators, who require teacher certification 28).

There are plans to establish a Tlingit Language Nest (akin to those found for Hawaiian and Maori) 29).

In rural villages, where the large majority of students are Alaska Native, most schools offer some kind of instruction in Tlingit in the early years, and several incorporate Alaska Native issues, perspectives and traditional knowledge in the school or district curriculum. Community members may serve as classroom and bilingual teacher aides in nearly all village schools 30).

As for urban schools (the three largest cities in Alaska being Anchorage, Fairbanks and Juneau. Tlingit is spoken in the latter), which serve nearly 30% of Alaska Native students, the teaching of the language varies greatly depending on the city 31). In Juneau, some pupils are taught Tlingit once a week, typically in 30 to 40 minutes lessons, often taught by elders 32).

The Juneau School District plans to expand the teaching of Tlingit culture and language at its elementary schools to all students. Glacier Valley Elementary School started in 2015 a Tlingit language enrichment class, which was the first of its kind in Southeast Alaska 33).

The Juneau School District has recently implemented an Indian Studies program, whose objectives for the school year 2017-2018 include the increase of Native American / Alaska Native Language Instruction Programs 34).

Tlingit can be learnt at the University of Alaska Southeast 35), where you can even get a Tlingit Language Minor 36).

Tlingit is also taught at the University of Alaska Fairbanks 37) as part of their Alaska Language Classes and Degree Programs. They normally offer Yup'ik, Gwich'in and Tanana, but Tlingít courses are arranged upon request.

Tlingit is also taught at the University of Alaska Anchorage 38) as part of their Alaska Native Studies Program.

Many initiatives have been put in place to teach children and adults outside school in Alaska. The different branches of the University of Alaska, as well as Sealaska Heritage, offer courses open to anyone. Moreover, several native villages have their own learning activities.

Two of the most successful initiatives are: 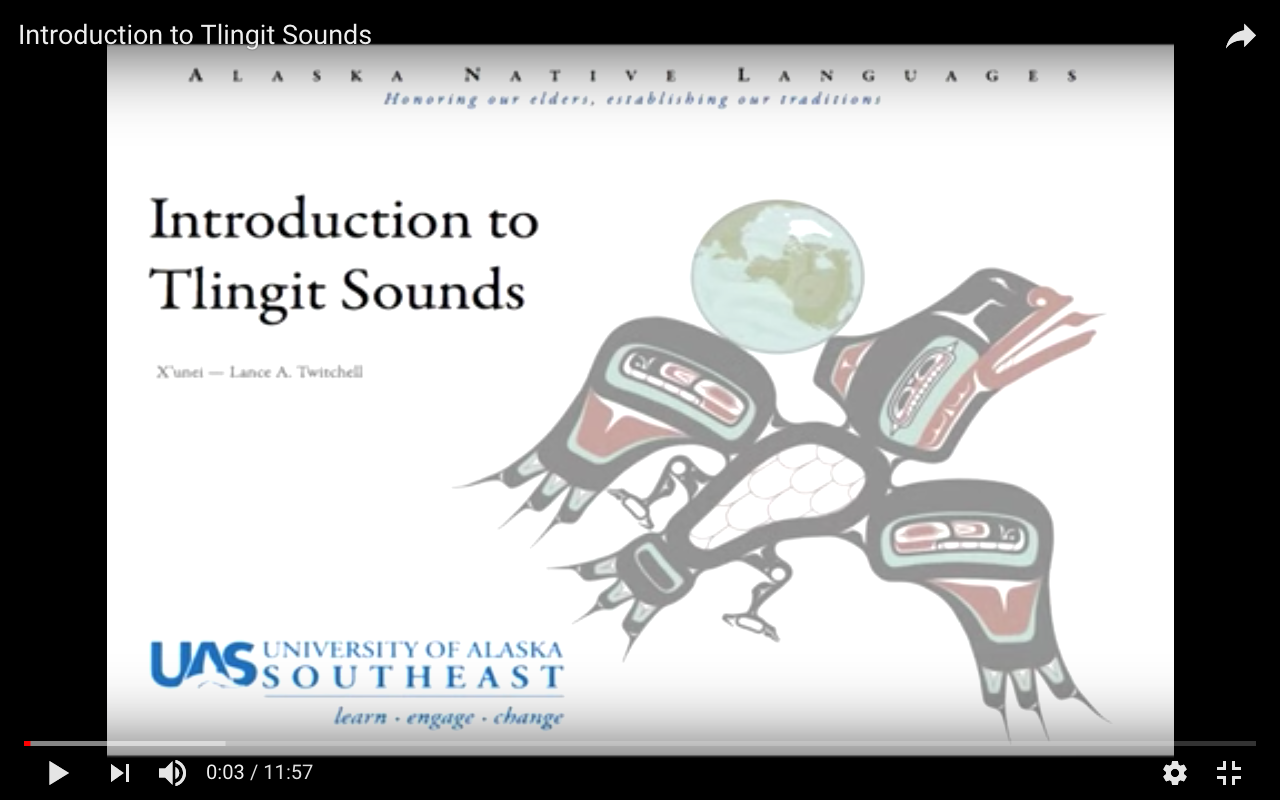 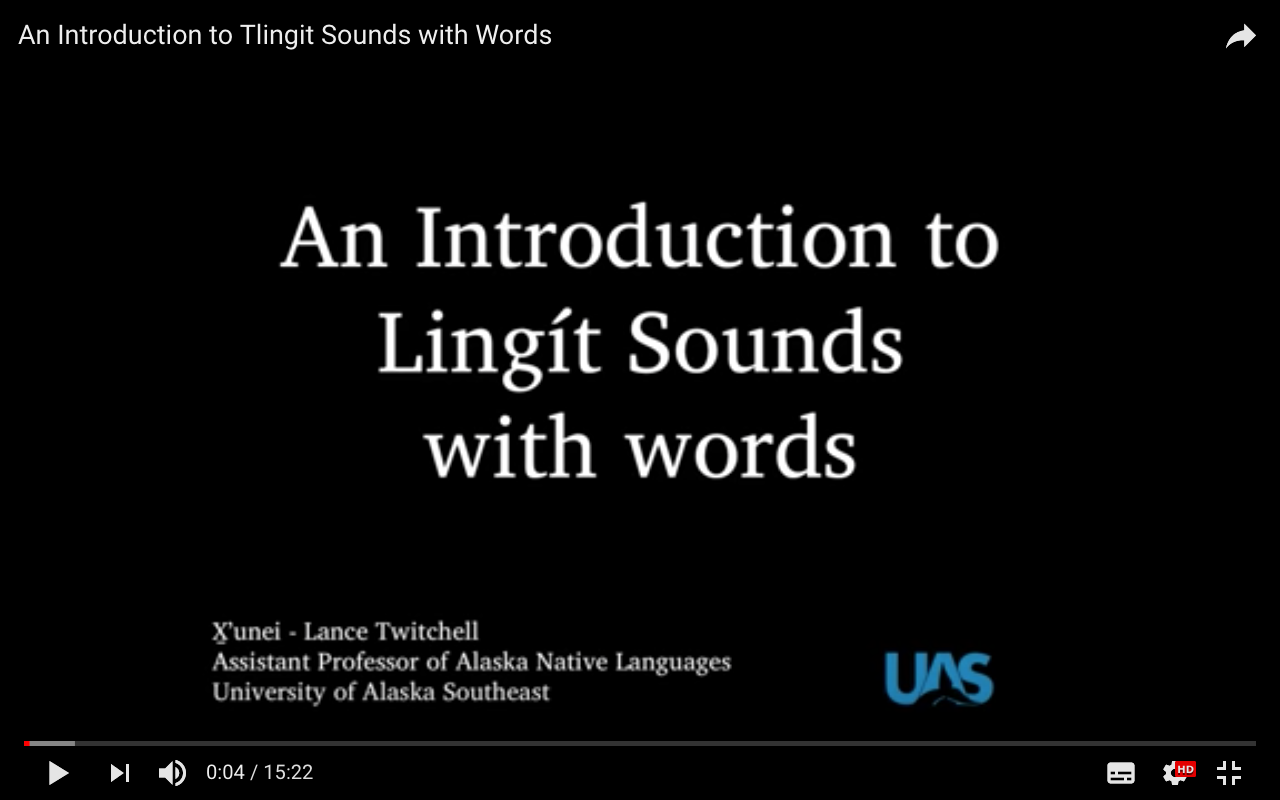 Goldbelt Heritage Foundation: Talking on the Phone in Tlingít

Sealaska Heritage: Language for the kitchen in Tlingit