A first academic series of standardisation of Bildts came from Hotze Sytses Buwalda, who wrote various articles from 1935 onwards1) In 1963, he wrote the general booklet Hoe skrive wy 't in 't Bildts (How do we write it in Bildts) 2)3) This standard for Bildts is highly influenced by the writing of author Waling Dykstra (1821-1914), who wrote several stories in Bildts, from 1852 onwards4)5).

In 1996, the first dictionary of Bildts, Woordeboek fan 't Bildts. En list fan toponimen, was published by the Fryske Akademy, as the collective work of Hotze Sytzes Buwalda, Sytse H Buwalda en Anne C.B. van der Burg 6)7). This dictionary was welcomed greatly, some even saying it raised the status of Bildts from a dialect to a language 8).

As the popularity and need of the dictionary was high - it was sold out for several years - a second edition was published9)10). This second edition did not include the toponymical list, but did include a slightly adapted version of the aforementioned writing guide Hoe skrive wy ’t in ’t Bildts (covering additional information, such as a detailed orthography and grammar). The dictionary was the collective work of H.S. Buwalda, S.H. Buwalda, A.C.B. van der Burg, and H. Sijens11)12).

Bildts is highly linked to the area Het Bildt, as the mixed language developed there due to language contact between Frisian speakers and speakers of the Dutch varieties from South and North Holland13)14). Half of the speakers live within this area, and most of the other half live in the vicinity15). Het Bildt is a polder in the North-West of the province of Fryslân, the Netherlands, reclaimed after the first dykes in that area in 150516). 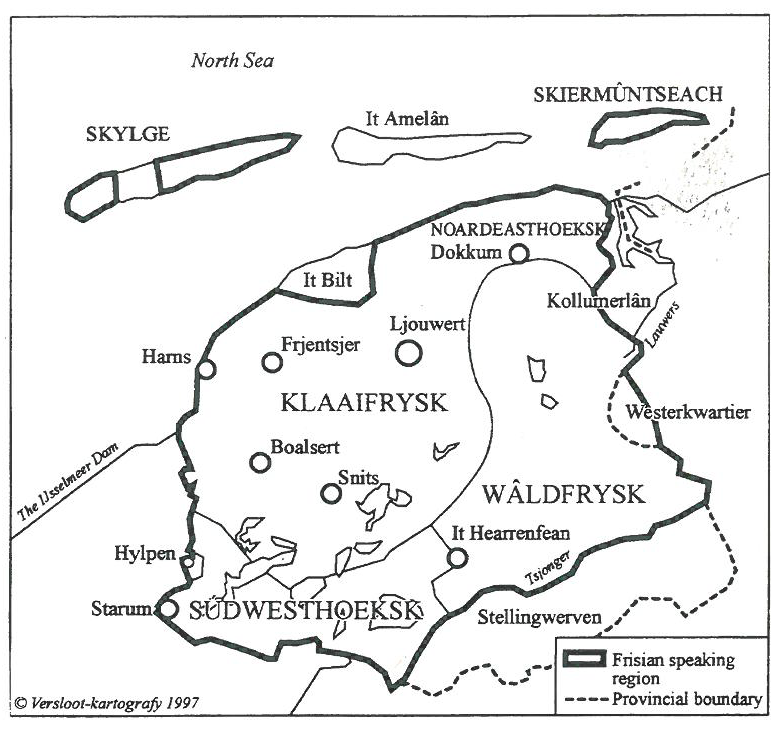 A map of the province of Fryslân that shows the language varieties. The area of It Bilt (NL: Het Bildt) is shown in the North-West. The thick line indicates the Frisian speaking region. Also shown on the map is the city Frjentsjer (NL: Franeker) where Franekers is spoken.19)

It is estimated that there are six to ten thousand speakers of Bildts 20)21)22).

The Frisian census on regional languages 2014 reported the following responses from Het Bildt regarding both language skills (productive and receptive) and usage and exposure:23)

Table 2: Bildts language use of respondents

The call for Bildts language education was set in motion due to the lower educational law amendment of 1974, which allowed Frisian to be used as language of instruction at all levels of primary education, and which established Frisian as a regular subject in all primary schools of the province of Fryslân, starting in 1980. Propelled by this, action was taken and Bildts was allowed to be taught next to Frisian. To provide for educational materials, a special committee,De Commissie Bildts, was established in 1979. Nowadays, Kemissy Meertalighyd (‘the Multilingualism Committee’) and Cedin have taken up most of this work.24)

In 1984, the Frisian speaking village Minnertsga/Minnertsgea was added to municipality Het Bildt, which caused another wave for the Bildts language and culture movement, eventually leading to equal status for both languages in the new enlarged municipality. In 1980, Stiching Ons Bildt was founded to support the language and culture, which organised Bildts language courses for example.25) This organisation merged with the Bildts Dokumintasysintrum, cultural-archaeological visitor centre Aerden Plaats, and the abovementioned Kemissy Meertalighyd into the Stichting Bildts Aigene foundation in 2015, of which the last two went their own way again after a few years.

Nowadays, Bildts language education is mainly provided at primary schools. It is also offered as language courses for adults.

In 2018, the municipality Het Bildt amalgamated into the larger municipality of Waadhoeke. In anticipation of this administrative change, there was an increased amount of activity and efforts to have Bildts recognised as a (minority) language.

For this, researchers at the Fryske Akademy were asked to research Bildts, which led to several studies 29)30)31). They concluded that Bildts is neither a Frisian nor a Dutch dialect, but a mixed language. Eric Hoekstra, one of the co-authors: “We hope that our analysis of Bildts, as a mixed language rather than as a dialect of either Frisian or Dutch, may serve the policy makers of the Ministry, who will decide on the recognition of Bildts as a language” 32)

Despite the efforts, Bildts was not recognised on European or national level, but the language has received recognition at both provincial and municipal level.

In 2016, municipality Het Bildt and language activists were in pursuit of recognition for Bildts under part II of European Charter for Regional and Minority Languages. They received support of the Province of Fryslân for this recognition, but the Dutch government decided not to recognise Bildts as a regional or minority language.33)34)

This decision came after a negative advise from the Taalunie (Language Union) in 2016. The Union was of the opinion that, though Bildts as hybrid language is neither Dutch nor Frisian, it does not mean Bildts is a language rather than a variery of either Dutch of Frisian. The Union states that the purpose of the Charter is not to “elevate more regional languages to distinct cultural languages. Mixed varieties do not need an own umbrella if they can shelter underneath the common umbrella of existing cultural languages.” 35)

Bildts is not recognised as a regional or minority language in the Netherlands.
In 2017, after the negative advise of the Taalunie (Language Union), a petition to recognise Bildts was presented to members of the Dutch Parliament and Senate, but the topic was not discussed in the plenary session on the amalgamation. 36)37)38)

The Dutch law on Primary Education allows for regional language varieties “which are in lively use” as medium of instruction besides Dutch at primary level.39)

The Province of Fryslân as well as the municipality Waadhoeke support Bildts, and have included the language in their language policies:

Bildts education and educational materials is supported and provided by:

The province of Fryslân and municipality has financially supported the production of pre-school and primary school educational materials in Bildts.45)46) Almost all materials are made available online for free by Bildts Aigene and Kemissy Meertalighyd.

For pre-school, the Frisian series Tomke has been translated to Bildts, both books as short stories. Tomke is to be read to children aged 2-4 to stimulate the language use. The Bildtse Post, the local newspaper, also published a Tomke story every week, around 200 in total47)

There is one study book made in Bildts for the two highest years of primary scool, which is Bildtse Taalrotonde, published by the Komissy Meertalighyd in 2006. It is translated from the Frisian study book Fryske Taalrotonde.

Moreover, there are various learning materials developed by Komissy Meertalighyd (in cooperation with Cedin):

Two primary schools have made own materials to use in class, one school for all levels, the other school for the lower and middle years.48)

During the COVID-19 crisis in 2020, a Bildts colouring and story booklet was published and provided for free for the first three years of primary schools.49)

The educational activities are financially supported by the municipality, but nonetheless “also exist by the grace of volunteer effort, having allowed this infrastructure to exist cost-effectively.”50)

According to the 2018 Frisian study on language education, teachers express a need for a specific Bildts didactic teacher course.51)

Some primary teachers, from four out of the six schools in the former municipality, have attended courses to improve the Bildts language skills. These courses include Bildts for native speakers, Bildts for non-native speakers, or courses on multilingualism. Two schools promote the attandence of such courses, two schools are open for teachers to request the courses. 52)

There are several pre-school facilities in the Bildt, where Bildts may be used informally.54)

A study on Frisian language education by Varkevisser and Walsweer (2018)55) also did research on Bildts language education at primary schools in the former municipality Het Bildt. This study showed that Bildts is taught up to one hour a week at five of eight primary schools. Two schools do not teach Bildts, as they are situated in Minnertsga/Minnertsgea, and the third school that does not teach Bildts states the low number of Bildts speaking pupils, which is 1 in 6, as the reason. Out of these eight schools, five have a language policy which include both Frisian and Bildts. The Bildts language classes don't take place at all levels, but mostly take place in the lower levels and are often dependent on the teacher. What is more, three schools also use Bidts as language of instruction.

The Bildts language proficiency is not tested, as adequate means to do so have not been developed.58)