Low Saxon is not a standardised language. Its main varieties are Achterhoeks, Drents, Gronings, Sallands, Stellingwerfs, Twents and Veluws. Within the main varieties of Low Saxon, different dialects can be found. Examples of the dialects that constitute Gronings are Groningen-East Frisian, Veenkoloniaals, Westerwolds and West Groningen.1) The varieties within the province of Groningen are however codified (Bloemhoff et al., 2013, p. 499). 2)
Spelling rules were introduced in the early 1950s in Groningen, which were based on the second edition of K. ter Laan's Nieuw Gronings Woordenboek (Bloemhoff et al., 2020, p. 84). 3) In the 1980s Siemon Reker published an adapted version of ter Laan's dictionary (ibid). 4) The dictionaries of ter Laan and Reker, as well as Reker's spelling rules for Gronings, can be found on WoordWaark. The website is a joint effort of the Centrum Groninger Taal & Cultuur and the University of Groningen.

A research project in 2003 focused on eliciting command and use of Low Saxon varieties in nine areas. The results for the province of Groningen show that out of the then population (574,500) 77.7% declare to be able to speak their variety but only 45.6% actual use Gronings, or together in combination with Dutch, at home (Bloemhoff et al. 2013, p. 499). 5) The percentages for their ability to read and actual frequent reading are similar (72.6% and 46.4%) (ibid). 6) All answers were self-reported estimations by the respondents (ibid). 7)

A substantial north-eastern part of the Netherlands is traditionally referred to as the Low Saxon area (Hinskens and Taeldemann, 2013, p. 139).8) The geographical area referred to stretches from the province of Groningen southwards to the eastern corner of Utrecht province, more precisely the Veluwe, and to the Achterhoek in Gelderland (ibid). 9)
Gronings is correspondingly spoken in the province of Groningen. Groningen is the north-eastern province that borders Friesland to the west, Drenthe to the south and shares a border with the German federal state of Lower Saxony to the east. 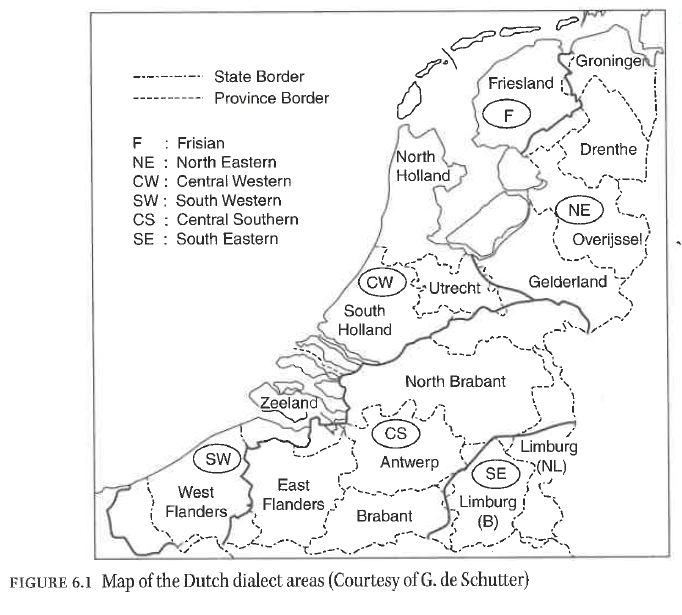 The map displays a possible division of dialect or language areas in the Netherlands and the provinces of Flemish Belgium. The aforementioned north-eastern part which is traditionally characterised as the Low Saxon area can be found in this map. As described above, the area covers the provinces of Groningen, Drenthe, Overijssel, a large part of Gelderland as well as parts of Friesland and a small corner of Utrecht.

Factors such as gender, educational background or urbanisation only plays a little role in number of speakers of Nedersaksisch in comparison to the aspect of age (Bloemhoff et al., 2020, p. 116).11) The numbers for speakers who mainly use their regional variety at home show a substantial difference between the age group of 61 and above, and the age group from 18 to 39 (ibid).12) 40% of the older age group use their language at home while only 17% of the younger age group do so (ibid). 13)

Low Saxon has never been part of education curriculum and schools are not obligated to incorporate any kind of courses on Low Saxon (Bloemhoff et al., 2020, p. 105).14) Low Saxon is barely represented in traditional media. It is not in use in national broadcasting but sometimes on local and regional television or radio (Bloemhoff et al. 2020, p. 109). 15) The regional station in Groningen, RTV Noord, airs for about 15 hours per week in Gronings (ibid).16) Online learning resources have only been started to be developed recently, as will be discussed in the chapters below.

The Netherlands signed and ratified the European Charter for Regional or Minority Languages by the Council of Europe and it came into force in 1998. Within the Charter Low Saxon is protected under Part II Article 7. 17) In 2018 steps were taken to promote Low Saxon on a national level.
The 6th Periodical State Report from the Netherlands (2019) to the Council of Europe gives account of developments and actions that have been taken regarding the minority or regional languages recognised by the Netherlands under the ECRML. That includes Low Saxon and its varieties. The report states that the organisations, affiliated with Low Saxon, observe a trend towards a positive change in attitudes towards Low Saxon (6th Periodical Report, 2019, p.17).18) The trend is said to be linked to the adoption of the covenant on Low Saxon (ibid).19)

The Administrative Agreement on Recognition by The Netherlands of the Low Saxon Regional Language was signed on the 18.10.2018 by the Minister of Interior and the political representatives of the provinces of Drenthe, Friesland, Gelderland, Groningen, Overijssel, West- and Ooststellingwerfs. The agreement states that the provinces and municipalities in which the respective variety of Low Saxon is used, decide on its language policy concerning that language. Education in Low Saxon may be provided according to the agreement.
In primary schools it may be used as a language of instruction given that Low Saxon is a living language in that area. At secondary schools it can be offered as an elective course outside of the core curriculum. The possibility to offer Nedersaksisch courses outside of the core curriculum are also stated in the order of the Secondary Education Act (2020).20) Consequently the responsibility of implementing the regional language in education lies with the province or municipality.

Learning resources for Nedersaksisch vary in their extensiveness depending on the variety. Resources for Gronings are made available for different age groups that range from children to adult education. The Centrum Groninger Taal & Cultuur (CGTC) offers language courses for different levels to adults including a short introduction course .
One learning resource available for primary schools is the newspaper Wiesneus. Wiesneus is a project originally launched for Drents by the Huus van de Toal (engl. House of the Language) and is now translated into other varieties of Low Saxon, including Gronings. 21) 22) Primary schools from Groningen can obtain the magazine in Gronings through the CGTC.

Digital reading materials for a primary school level can be found on the Klunderloa website. The website was developed by the CGTC and contains children’s books, stories, poems and songs. Klunderloa is not only aimed at being used in a classroom setting but also at home with caregivers. In 2019 an app game project, also initiated by CGTC, has received funding to teach children the regional language in about 20 villages in Groningen.23)

The education law does not declare the use of Gronings to be compulsory in preschools. Preschools may decide themselves if they choose to use the regional language, next to Dutch.24)

Similarly to preschool, primary schools may also choose on their own whether or not they want to use Gronings in class. 25) The Primary Education Act (2020) states that a regional language, this includes Gronings, can be used as a main language in class if that language is used actively in the community. 26)
Some primary schools already use Gronings but it is not yet structurally implemented. 27) When schools integrate Gronings they often do this in the course of a project.28)

In 2018 the University of Groningen introduced a professor by special appointment of Low Saxon/Groningen Language and Culture. 29) This appointment is tightly connected to the Faculty of Arts and the Centrum Groninger Taal & Cultuur (CGTC). The special appointment aims at strengthening the position of Gronings within the province and also in academia.